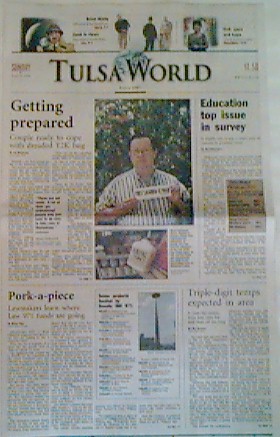 BUNCH -- It's hard enough getting to the Kirkwoods' hideaway.

The country roads that lead here burrow into the wilds of Adair County. The dirt road at the end climbs into the forested hills where the former computer salesman and nurse from suburban Dallas make their home.

They would have looked even deeper into the woods for a place, but if TEOTWAWKI happens, they want to be sure their children and grandchildren still living in cities can reach this sanctuary in time.

"TEOTWAWKI" is an acronym heard among an increasing number of people who worry about the Millennium Bug and what chaos will come if the switch to the Year 2000 disrupts computer networks worldwide.

They're talking about "The End Of The World As We Know It," and it's catching on.

Byron Kirkwood says his and his wife's Internet business that sells books and survivalist supplies has quadrupled its sales since a year ago.

Realtors in these rural Oklahoma, Arkansas and Missouri hills are seeing an increasing interest in secluded properties from people who want to escape cities and be more self-reliant.

"These are not the camouflage-wearing, gun-toting survivalists you usually think of," Kirkwood said.

He had an order on his desk from a doctor in Houston who wants more water filters. He paused for a moment to take a call from a computer programmer in California who had questions about the shelf-life of certain pantry foods.

"These are not kooks," Kirkwood said. "A lot of them are professional people who just want to be able to take care of themselves."

They bring with them the spending power that has allowed them to make drastic changes in their lives and provide an economic boost to businesses that cater to their needs.

"Our business has grown significantly," said Mack McMillan, who designed the web page on the Internet for a Salem, Mo., realty company that advertises "Farms and Rural Acreage For the Survivalist" throughout southern Missouri.

Unlike other end-of-the-world scenarios, the potential computer breakdown around Jan. 1, 2000, provides doomsayers with a more tangible apocalypse.

This time, fearing TEOTWAWKI doesn't require submitting to raise-the-dead calamities described by Nostradamus or other hysteria based on someone's idea of a wrathful God hurling fire at some uncertain point in the future.

This is something of our own doing. And it has a specific deadline.

As the clock ticks over to the Year 2000, many computer networks that are programmed to read years only by the last two digits are going to think it is 1900. With public services, financial networks and other systems tied into more computer networks than can be imagined, the task of fixing the problem is a monstrous one.

Many public and private sector executives who were warned of the problem years ago by computer programmers put off repairs, hoping that technological improvements would provide less-expensive solutions.

"Everybody was waiting for the magic pill," McMillan said. But now a lot of people think it may be too late.

Fearing an apocalypse over the Millennium Bug requires some of the same lack of faith in government as with other survivalists' concerns. It carries a fear that the masses in the cities won't hang together but instead will reveal their worst if things really do get desperate.

The new survivalists are people who don't want to take that gamble when spokespeople for public utilities, banks or other entities try to assuage concerns about the Millennium Bug with the calm words, "We're working on it."

They'd rather take their chances in finding a nice piece of land "with constantly running water or artesian wells and good hardwood cover in rolling hills where you could put a house 300 yards off the road and not see it," McMillan said.

"The interest (in rural property) grows daily," he said. And some of the inquiries, he added, have come from people in government and from computer programmers, which he said should tell you something.

"If the pilot of the plane puts on a parachute, wouldn't you get nervous?"

But even with the interest in survivalism, more people, including plenty of computer programmers, seem to be comfortable enough taking their chances in the cities. The fact that he has taken to the hills, Kirkwood said, doesn't mean he's sure all those city dwellers will be sorry later.

The Millennium Bug may turn out to be only a "hiccup," he said. It may mean little more than a few days without power for some people, some inconveniences with the automatic teller machine, a few headaches with the computers at work, lost accounts, late shipments.

But being an old Boy Scout, Kirkwood said, he lives by the motto "Be Prepared."

He doesn't even like the word "survivalist." He thinks of the trend more as "emergency preparedness." Others of the same mind like to be thought of as friendly neighbors, even if some prefer to be a little vague about where they live or what they have stockpiled.

The Kirkwoods are hardly recluses. There's no camouflage or firearms to be seen on their seven acres. They are members of the local chamber of commerce. He is a volunteer firefighter.

Granted, the apocalyptic books, long-lasting food supplements, hand-cranked radios, all-purpose knives and numerous other items on the shelves of their storehouse reveal what some folks might regard as a streak of eccentricity.

But, as a bumper sticker pinned on their wall reads, "They laughed at Noah."

Besides, he said, even if it turns out that the world handles the Millennium Bug just fine, it ain't bad living out here in the country.

Cookson real estate agent Donna Billings said there is comfort and pride in self-reliant living that may have as much to do with the growing number of people leaving the cities as with the threat of a computer meltdown.

When Billings sold the Kirkwoods their Adair County property five years ago, she said they told her more people would want to escape the cities in the coming years.

"They were right," she said.

But Billings doesn't talk about TEOTWAWKI. She doesn't call the newcomers survivalists, although she has certainly heard about the Millennium Bug and knows how it concerns a lot of them.

"They're lone eagle people who can live on their own," she said. "It all comes down to getting their kids out of the city where there is less stress, more peace, less worries and more beauty."

And that's good for business. Whatever it is that is bringing people out of the cities, the real estate agent said, "it's working for us."

Use the BACK button on your browser to return.